Hands up who thought paradox was something you put in the bath? That’s called Radox you fool.

Anyway a student asked me the other day about how to do Karandavasana ( see video below)  and without sounding clever I told him to do Surya Namaskar A properly. You see in Ashtanga Yoga, the thigh bone’s connected to the hip bone, the hip bone’s connected to the backbone, the backbone’s connected to the neck bone and Karandavasana is connected to Surya Namaskar. You see my point of view is this, the practice ( i.e. the Ashtanga Yoga sequence )  is the macrocosm and each posture ( from the sequence) is the microcosm, so if you do one posture incorrect this in turn makes the whole thing one big fail. We have to learn to let go of the idea that some postures are bigger, better, shinier than others, they are not. They are all as important as each other.  We put so much emphasis on certain postures being the be all and end all of the practice we kinda forget about everything else. We can get so caught up on certain postures (even before we have even got to them in the sequence) to the exclusion of attention on the postures preceding the (imagined) Instagram crowd pleasers. 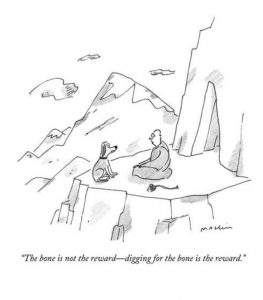 I came across this cartoon above a good while back and even though it’s a ‘Zen’ lesson of sorts ( did I tell you I practice Zen ?!!?) it’s teaching makes absolute sense for an Ashtanga context too. When I introduced Zazen ( Zen meditation)  to precede my Ashtanga practice I was amazed at how much I was not paying attention. I would get so caught up in trying to find the bone of Supta-Kurmasna with legs & hands bound ( primary series ) , Kapotasana & Karandavasana (intermediate series) , Viparita Shalabhasana (Advanced A) , feeding the kids ( 7th series) I would forget where I was up to in the sequence – I kid you not. Then I started to sit first and BOOM every posture became worthy of a Facebook status update photo.The devil (or Mara to all you Buddhist fans out there)  is in the detail.

Get your house in order and pay attention to EVERY SINGLE POSTURE , then and just then Karandavasna will be coming.(And if that fails I can show you some short cuts for a couple of hundred bucks ) (That’s an obvious joke b.t.w doofus) .

* Ok so perhaps paradox isn’t exactly the correct word here, maybe conundrum would be better suited. Paradox for me is one of those exotic words that educated folk use and I never exactly know what it means and I thought if I just threw it in there people would presume I’m actually more clever than I am.